REACT JS Without Create React App - Build your own workflow

The easiest way to start practicing React is through Create React App (CRA). But we are choosing the hard path. In this posts, we will learn how to setup React workflow without create react app, so that we will be knowing what's happening under the hood.

At the end of this posts, you should be able to understand how Babel and Webpack fit into this ecosystem.

In the previous posts, we learned about the basic concepts that one need to know before jumping into React. Have a look at the previous post, so that it would be easier to grasp the React basics for newbies.

Check it out: REACT JS Concepts - This Tutorial Doesn’t Assume Any React Knowledge.

Steps involved in setting up React from scratch

9) Creating a simple Hello world application to test the setup

First, we will create a package.json file to manage the production and dev dependencies.

-y flag denotes a brand new package.json file has to be created with all the default values/configurations filled. This is how it looks like after initializing is done.

There are two packages from the NPM directory that we want to install. REACT and ReactDOM. Prior to v0.14, all ReactDOM functionality was part of React. As the name implies, ReactDOM is the glue between React and the DOM. Often, you will only use it for one single thing: mounting with ReactDOM.render(). For everything else, there's React. You use React to define and create your elements, for lifecycle hooks, etc. i.e. the guts of a React application.

Below entries will be added to package.json file. 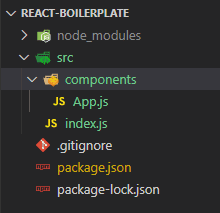 Not only the transpiling alone is enough, bundling the javascript and css files needs to be done. For this, we are using Webpack.

Now we have installed most of the dependency NPM packages. Let's get started to setup the webpack config file.

Create webpack.config.js in root of the project folder. As we are bundling the mulitple javascript files into one and create the destination folder at runtime, we need path module.

We will be placing the dist folder in the same directory as webpack.config file present with filename as index_bundle.js.

So far, we have wrote config for bundling js files. Next, we have to transpile the ES6 syntax to ES5.

We are having rules array where each rule has to be written as an object. First rule, we implemented is scanning for .js or .jsx extension files and using babel-loader plugin on it to transpile. We are excluding node_modules so that files inside of it won't get affected.

Before getting into the installation part, we will see through the usage of htmlWebpackPlugin. Basically, this plugin will create index.html file for us with automatic addition of script tag in the body section of HTML file. We will just have to create a template and specify the path for the same, rest the plugin will take care.

Inorder to use the presets (babel-preset-env & babel-preset-react) for transpiling ES6 to ES5 syntax and react JSX syntax preset, we have to declare the presets that we are using in .babelrc file in root of the project folder.

Before running the react application, we have to setup the script commands for webpack dev server with hot reload.

Above two script commands are for development and production. --open will open the localhost automatically once the command is entered in the terminal. --hot will auto reload the server on CTRL+S.

Build command is for production purpose where it will create the dist folder with bundled javascript file.

Another issue on babel presets.

We have to change the value in .babelrc file as below:

Last but not least, we will check the build process and see if the dist folder is getting generated with bundled javascript file. Also the index.html file with script reference to index_bundle.js.

The dist folder got generated and in the index.html, the script tag got added with correct bundled JavaScript file.